What are you working on?

I’m working on a 2D race track to learn more about navigating round a surface, and a board game where you drop a couple of objects and get points for the various positions they end up in.

I am currently working on a 3D graphing program that not only displays 3D functions (or 2D functions, if that is what you are into. I don’t judge). It will also take in greyscale pictures an tuen them into height maps. And from these height maps you can then map them to the sphere for globes. I have been working on some shaders to light these surfaces that I am creating and I have successfully created a wireframe shader that is pretty cool (especially on the globes I create). I am also trying to port my graphing function to a shader so I can implement @spacemonkey’s sin function shader with my own tweaks.

As a side project for a professor of mine, I am implementing a better version of marching cubes (that is correct :P) called Dualing cubes that will surface 3D data that a colleague of his collects.

That’s all I can think of at the moment.

Im working with a few other Codea users to make a project, and it looks like we might form a small “Company” so to say

Working on a “windows” class: will add one or several windows to the screen. Print() will be redirected to any of these windows, with support of images and custom buttons. Performance goal is : 60fps compatible (everything goes into meshes), only 3 lines of code to be added (will try 1 line only), all settings ang savings managed by the class itself by ‘touch’. Then I will use this class to embed my various utilities (fps, progressbar, message popup, input popup, drop menu, etc…) so i can include them in any project with no additionnal code to write (3 or 1 line)

What is an ETA?
If that means ‘status of progress’ then: i have an operationnal proto, but the code is messy, so i am rewriting it. One window ouside graphics is done, currently recoding touch events on the window class, then: save, timers. Then inside class (printing area) graphics, touch, print redirection, all windows class (access, autosave), printable 1 button class (graphics, touch, timer, callbacks, types=push, push&warning), printable N-button class (exclusive options). I think it could take 1 more month to finish all that.

.@Jmv8 ETA = Estimated Time of Arrival/When are you going to release it?

I am making two games, one a simple physics game like lunar lander and the other is heavily influenced by Android:Netrunner card game and Shadowrun. When I get bored of those I make small UIs to assist with playing boardgames. So far: MageKnight, Powergrid, and Eclipse.
Codea is amazing.

I’m mainly mucking about with small tech implementations currently shader oriented so my next few attempts on that will be: autostereograms from a 3d scene, particle effects, water effects.

Beyond that I have a space game that I have fully conceptually framed up, but just at early stages of implementation, which will take a more strategic view to control rather than aiming and flying. Think Eve Offline

That one will probably never be finished.

I have 5 or 6 small demo things going on, too, but thought it would be too much to list. Only the big rocks right now

.@spacemonkey I had some fun with stereograms when shaders came into the beta. I put it on hold because my method involved drawing to an image and currently that doesn’t respect z-buffering. The kernel of what I was working on was that the “traditional” way of doing stereograms using height maps felt somehow wrong and that it should be possible to create stereograms directly from the 3D information in the mesh. 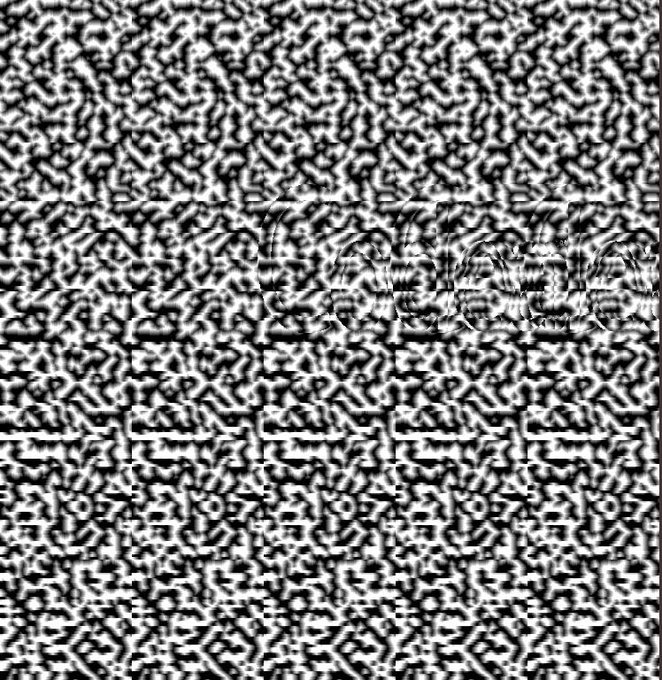 .@Andrew_Stacey. Image is Codea. I wrote a program that created stereograms when they first came out. I don’t even remember how long ago that was, 20+ years maybe. I’ll have to look thru the old programs on my junk PC and see if I can find it. There wasn’t much involved in creating it. Just a bunch of random dots and then shifting the image in one of them a few pixels depending on the the height you wanted it to have.

.@dave1707 Now that takes me back! I think I did some code on our 286 for stereograms using fractals as the base image. I still remember the first stereogram that I saw: it was a frog. That was before people made posters or books of them.

The “standard” way of doing stereograms seems to be to create a height map from the object and then to create the displacements of the stereogram from the height map. What I was trying was to work directly from the 3D information to make the picture. The rough idea is to view the stereogram from the point of view of one eye but texture it with the point of view from the other. It works, but there’s a few issues with the parameters that I need to tweak (basically, I need to actually do the maths instead of winging it) and the z-level issue with images means that it isn’t as useful as it could be.

I could never get Stereograms to work in my head - I can’t really see anyting in the image.

When the stereograms first came out on posters, we had about 10 of them hanging in the lunch room at work. There were a lot of people who couldn’t see the image no matter how long they stared at the picture or how many time they were told how to do it. I don’t have any problems with them. As soon as I see the picture, I can shift my eyes and see the image in about a second.