Stars and Asteroids - My game in Codea

hi all, after all the work and debugging i’m glad to present a preview of one of the games i’ve been working on in Codea : Stars and Asteroids

i originally made this game in javascript sometime back in 2013 and then remade it in Unity and c# around 2015 and got it on the app store, unfortunately it didn’t get many downloads or user, nonetheless, i’ve remade it yet again in Codea - it served as a great game to get going from the ground up and expand my core framework currently i’m working on responsive design to get the game to fit all devices, then i’ll publish on the app store as i’ve already tested it in xcode and it builds and simulates

Have you used craft in it? and how about the exported Xcode project, can it run on the xcode simulator? Few months ago, I tried to export my craft project to XCODE, unfortunatlly, it can not run.

it does not use craft, it’s all 2d

i did run it in xCode but there were a couple hiccups, you have to download the frameworks first which is confusing, and also make an empty Assets folder for some reason and then it builds

The same as me, the 2D can run on Xcode, how do you deal with the sprite sheet? character walk,run,fight animations? I think it is a hard challenge for programmers like us.

basically with this logic the shader chops the sheet into just the frame you want, then my animation sequence just swaps out “frame” with the next number in the sequence after X periods of time

the shader reads the image from bottom left to right to up, so the bottom left image is frame 1, and my animation sequence is actually frames 2-16

the shader can read image textures up to 2048x2048 so however many farmers you can fit into that space is how much you have fit one sheet, but then it can just swap out the texture with a different one “sheet 2” this operation is a bit more expressive for computation but in my practice it works fine, in even tested a really long animation that requires two sheets of space and it worked fine without any visible glitches

then i duplicate these over and over and use the trasform, warp, and liquify tools to adjust the positions and then scale them way down to create pixel art out of them, this helps remove a lot of imperfections in drawing, and then you can go over the pixels and refine them 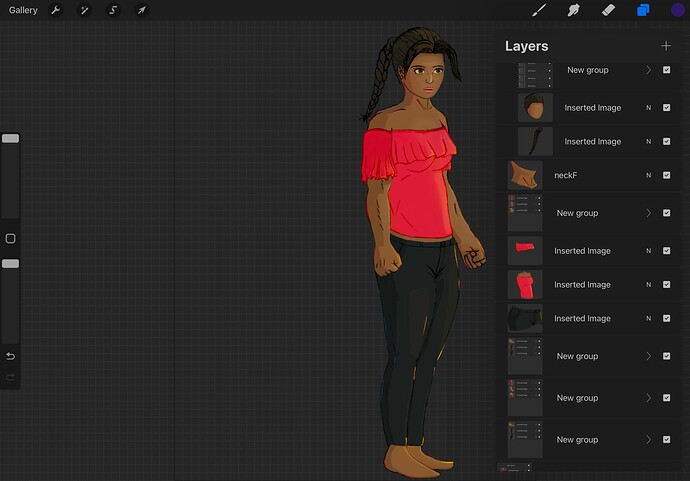 from the above layered character i made the running animation using a running reference for the key frames to position the limbs, then i warped and liquified them together and created frame by frame in between movement with simple warping of the key frames

although the process is relatively simple it is undeniably time consuming

And it looks like the character moves naturally and smoothly.

I guess it takes time to learn these painting skills.

thanks! but it’s almost a trick, i’m ok at drawing but not that great, look into a technique called “rotoscoping”

Nice!! The animated sprites really bring it to life

Wow, nice animations! I have used the flip a clip app to make sprite sheets. Not as advanced as procreate, but works nicely.