I was unable to get the latest version of Soda working.

I happen to have old versions of Soda and the Soda tutorial, so I want to share them with anyone interested in this amazing project.

(also, of course, the zipped projects have icons!)

I accidentally left a readImage() command in both projects, making them launch with unresponsive black screens.

I removed it from the Soda v0.7 project and that one should work now, but the Tutorial is having trouble still. Will try to fix.

@Simeon can you give some clues about this? As you can see I have SODA selected as a dependency but the error message says I don’t.

@UberGoober - oooh, that’s an error in a form that I haven’t seen. Looks like it might mean the integrity of the file is in question or the file format had changed since the last publication. I think I have a copy saved so I’ll try it out

@UberGoober - found and installed Soda, re-arranged the tabs got it to run, using inbuilt demo, but on running fired up an error after showing background screen. Haven’t even tried the dependency yet. Nor do I know which version it is. Any ideas?

@Bri_G I had similar problems and that’s why I posted an old version of soda here as a zip—which gave cause to name it “Soda life raft”.

Maybe try my zip and tell me if it works for you.

@UberGoober I’ve uploaded a new 0.7.2 version on GitHub and attached it here too.

It should work in the latest Codea 3.4.3 (300) and having played around with the demos I think it’s safe to say I’ll be using this for WebRepo 2.0

@Steppers - your version and demo work fine in latest beta. Thanks.

Nobody ever seems to use it, so I’m glad to hear all the hard work (that others put into making it) is benefitting someone!

They don’t tend to build more formal systems - games tend to be skeletal.

They don’t tend to like extensions to the core in the system.

Those are generalities - I’m sure some users use it a lot I intended to spend some time using it but never got the time, other projects dominated. But, now it’s back and running well I’m going to try and take advantage of it

@Steppers - Thanks for making this available again.

There are a fair few extensions to Soda as well so I’ll clean those up and make them available too when the time comes. 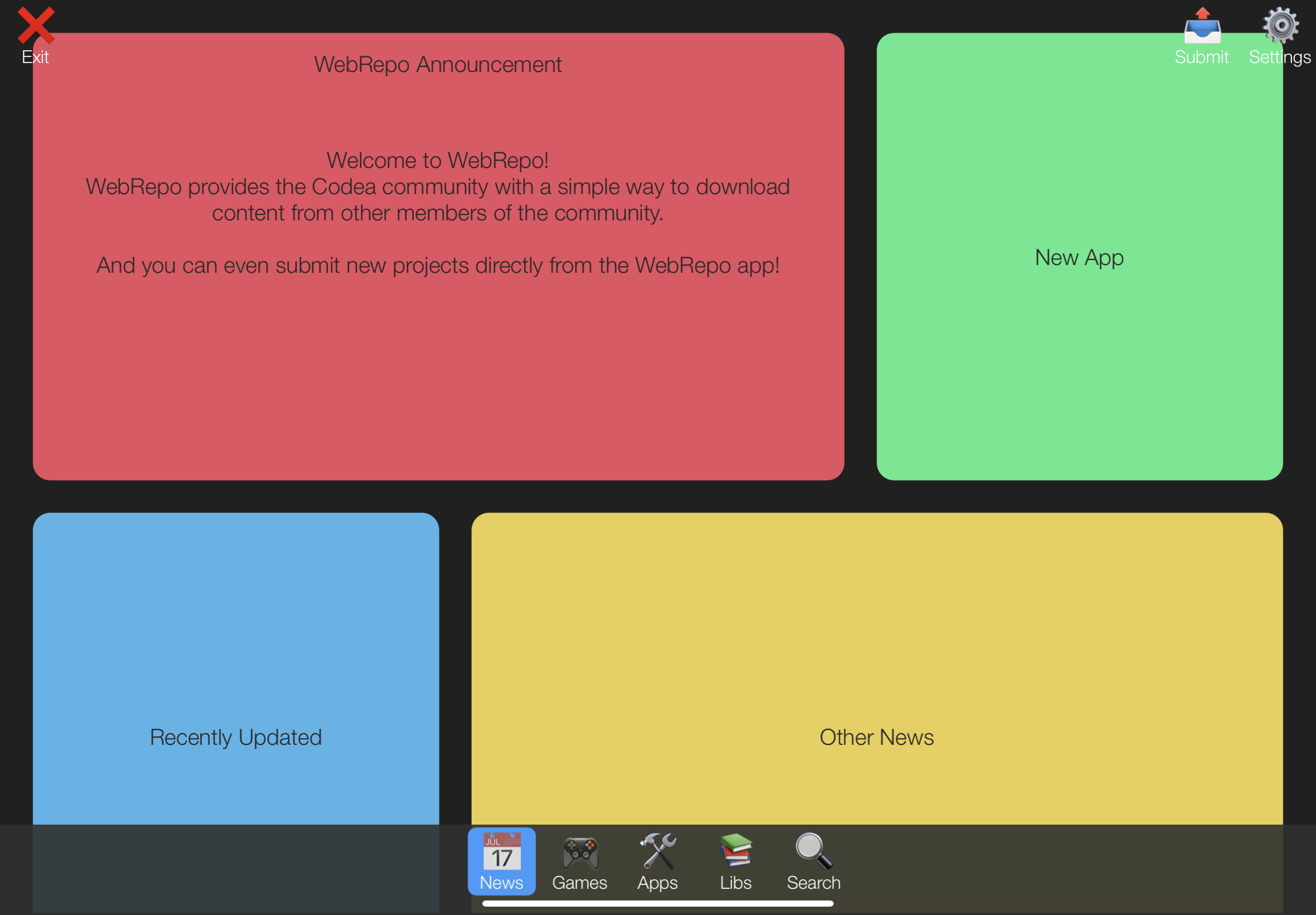 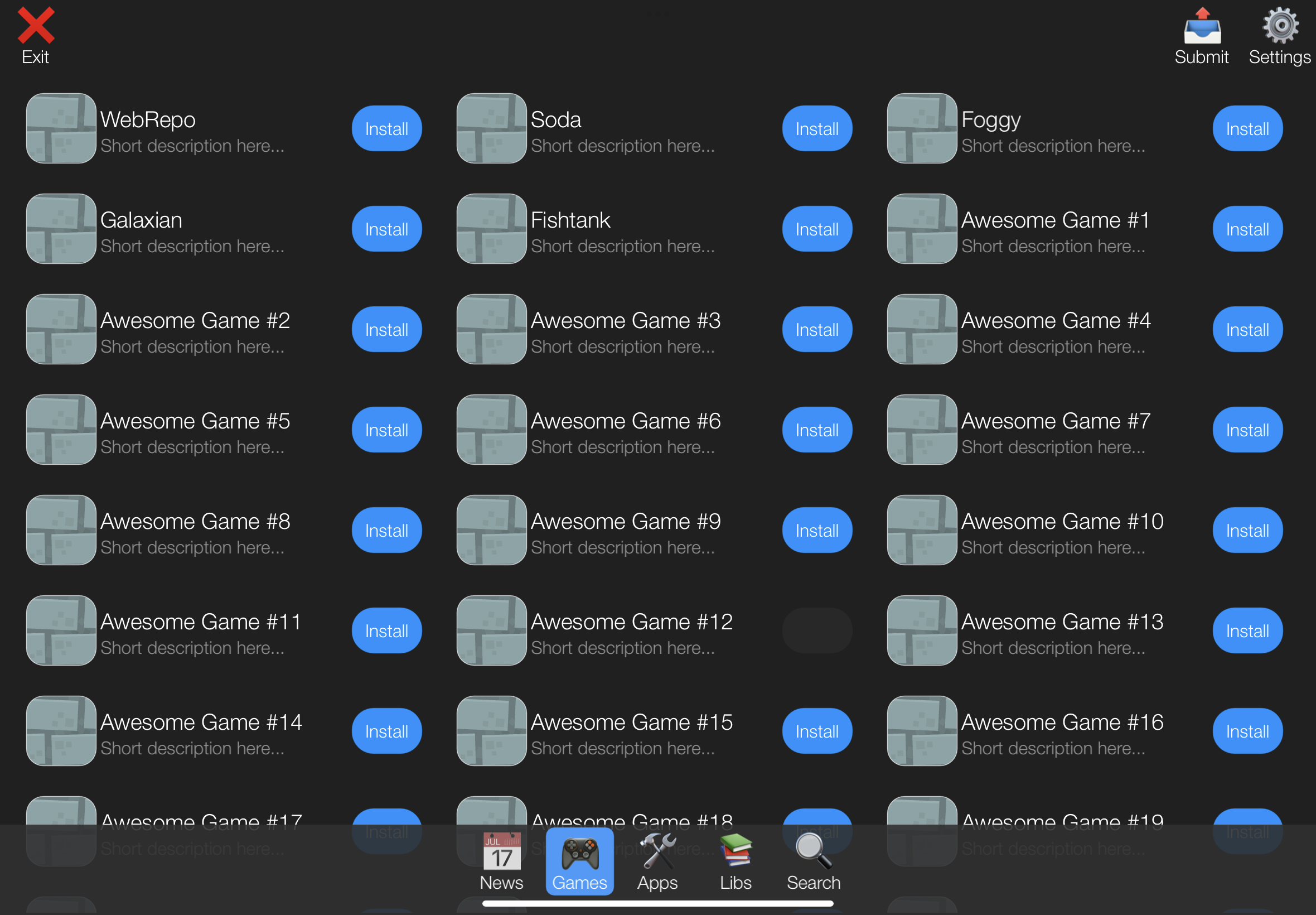 @Steppers looks great! What are these extensions you speak of?

@Steppers - nice screens. How many extensions have you found? Looks good with the basic Soda package - do the extensions add a lot of code?

@UberGoober @Bri_G In my case I’ve had to add a ScrollableFrame class allowing me to scroll all contents of a frame rather than just text.

And I personally use a keyboard with trackpad so I’ve added support for mouse scrolling and hover events.

It doesn’t bloat the code all that much but I’ve had to add a few workarounds/hacks for some issues I’ve come across so they’ll need cleaning up and consolidating before I release anything. It’ll probably come after WebRepo 2.0 is released.

@Stepprrs - looking forward to the new version, are you planning on combining interfacing mouse trackpad and possibly basic joypad as a module?

@Steppers since you appear to be a SODA genius, I wonder if you’d care to try your hand at fixing a bug:

The blur seen behind the buttons of the calculator stays exactly the same as it was when the calculator first appeared— figuring out how to fix that is way over my head, but it’s possible that it’s actually not that hard to do (for someone who knows what they’re doing more than I do).

@UberGoober Haha, thanks. Not quite there yet though.

I had come across this as I’d hoped to have the button dock at the bottom blur the apps as they scrolled by but it seems to be an intentional design decision for performance reasons possibly. I’d need to have a really in-depth look into the blur stuff as it’s only done once when the window is created.

I just figured I could sort out the effect at a later date and just used a translucent dock instead so It’s gone on the back burner for now.

At the end of the day, I’m sure recent hardware would be more than capable of updating the blur every frame so we’ll see.

@Steppers I have a project where I grabbed the blur code from SODA and then successfully made the blur update in my own code as I dragged buttons around.

I never figured out how to get it back into SODA though.

I’m not ready to share it on the forums yet, if you’re interested in picking at it, how would I get it to you?

@UberGoober Dropbox, Google Drive, iCloud anything you can generate a link with really. Just dm me a link.

@Steppers OK, I direct messaged it to you