As discussed ( http://codea.io/talk/discussion/comment/63536/#Comment_63536 ), here is an obj importer, plus a test model. I’ll add some more models over time. Feedback welcome (see especially the note below about how to split models).

An importer to bring 3D models in the popular .obj format into Codea

I tweaked it to draw the struts with the colour of the materials, and to use discard for the inner part of each face, for more consistent transparency.

I’d never heard of GLES standard derivatives before, they’re not even mentioned in the Kronos GLES spec! Amazing what you can learn on Codea Talk. 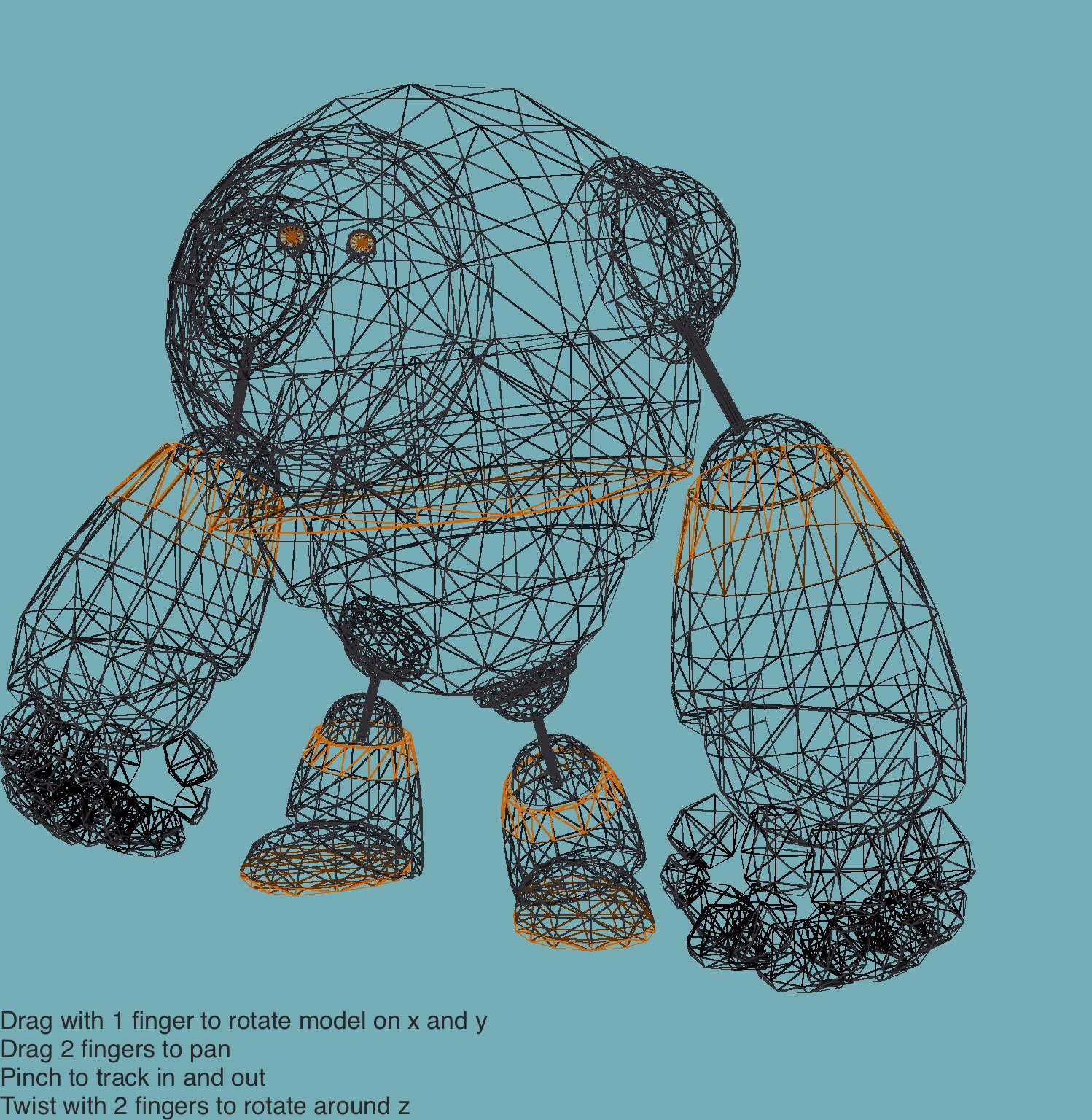 I added much better drag to rotate controls, now when you twist and swipe to rotate, the model always rotates in a consistent direction, no matter what its orientation is. I do this using the inverse of the model matrix to convert global touches into a consistent local rotation.

@Ignatz just saw your world of tanks post. Why not use this tank model (it’s a cc free licence)? Could do with being slightly lower poly… By coincidence I’m working on something tank-y myself…

Been a while since I’ve posted, still keep an eye on forum but have little time now to code. Also, updated my iPad2 to 9.02 and feel I need a machine upgrade.

As always interested in 3D so picked up on this thread - noted with interest on .obj model loader from @yojimbo2000 but can’t find link. Been playing with the one from @ignatz. Really need to get my head around how the system approaches the display of 3D. Some good references within the forum but none outlining how the OS approaches 3D.

World image taking into consideration hidden polygons, rotation, field of vision and transposition in movement of camera and objects.

Objects reconstructed in a specific order to ensure finished image of object intact.

Have I got the right approach? Any other aspects to consider?

@Bri_G oh yeah, I forgot to post the link. 8-} Thanks for spotting that.

I added a couple more models to the repo. 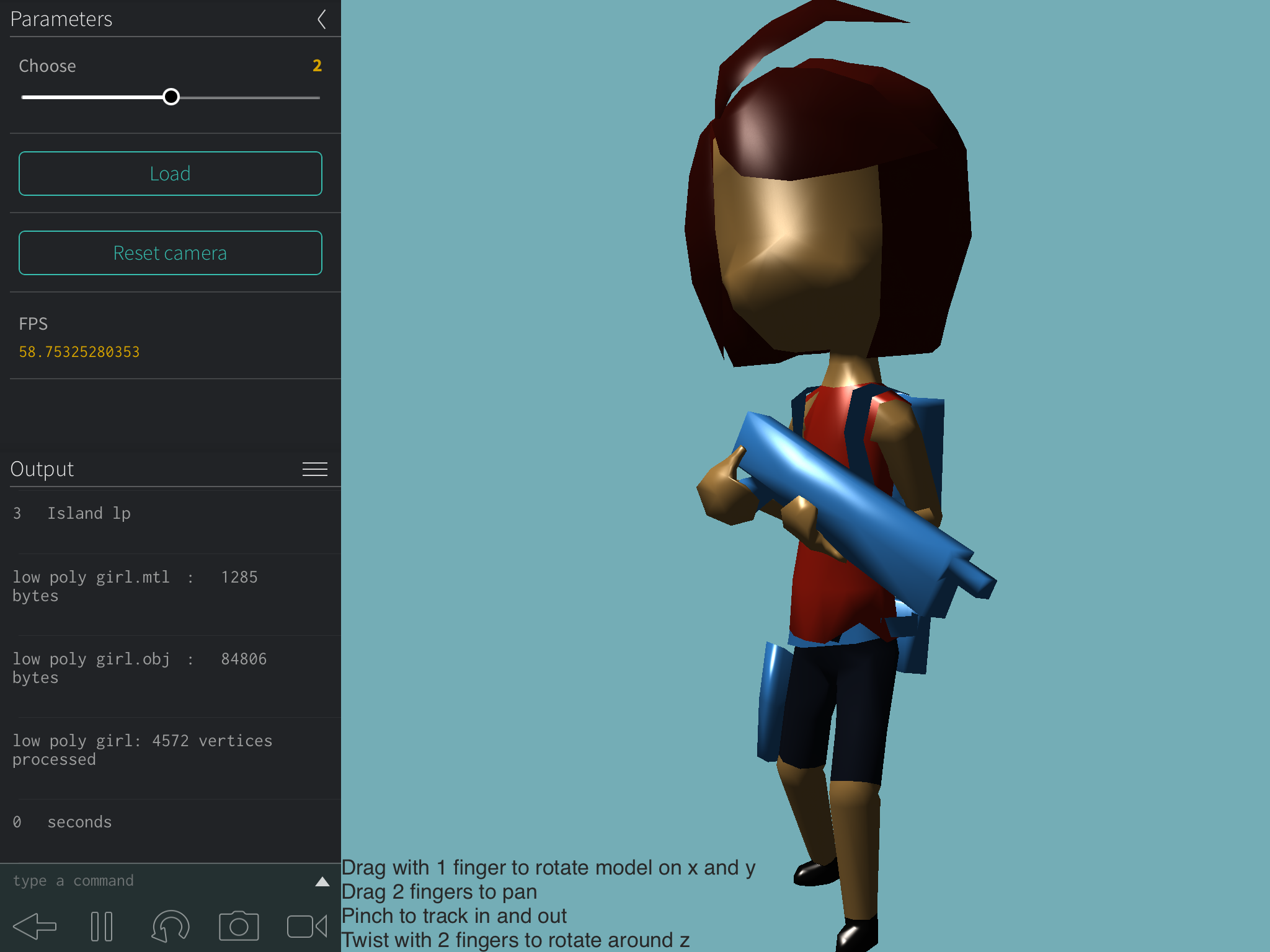 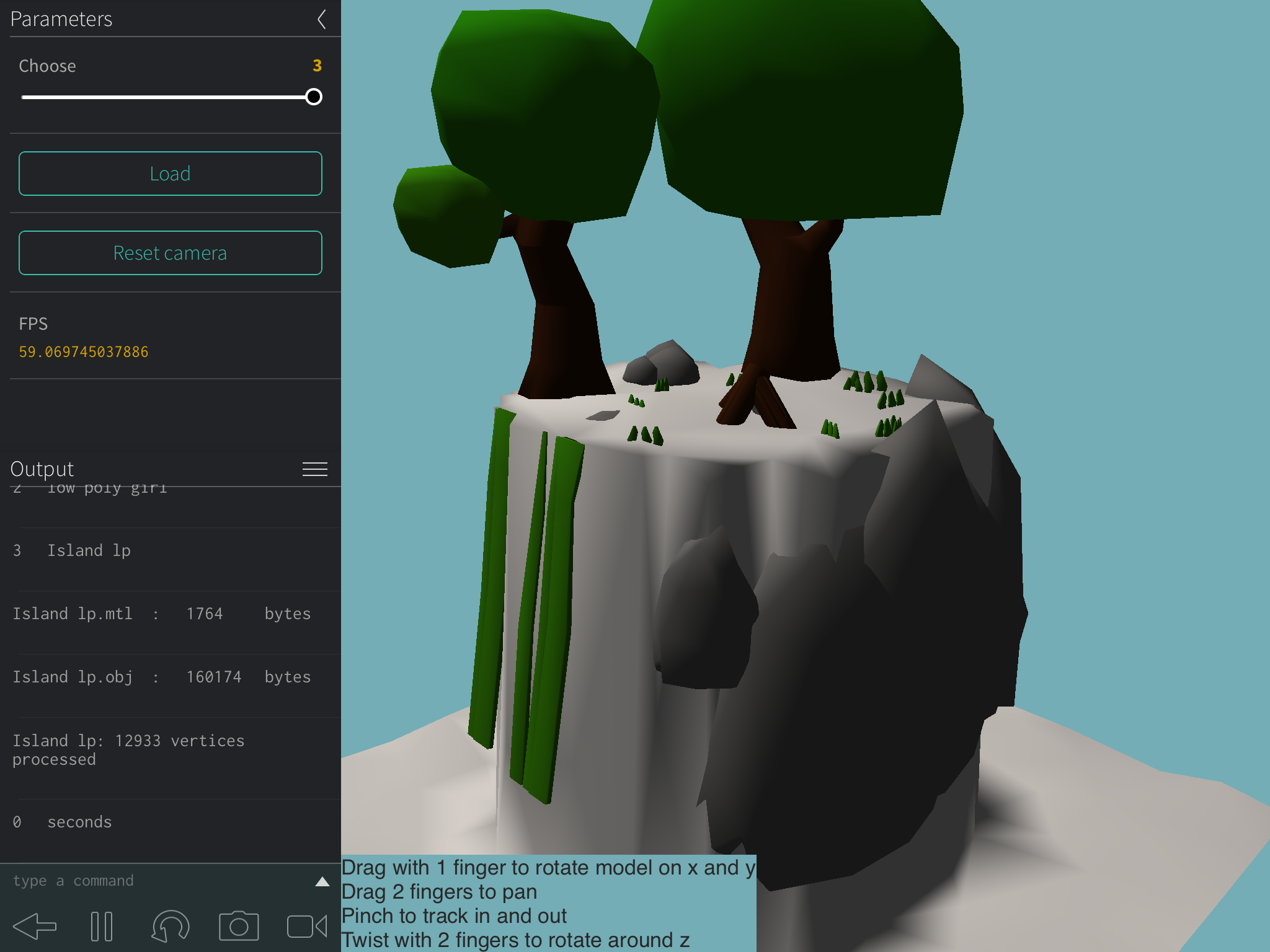 Thanks @yojimbo2000, very smooth. Just started loading up to dig into the code. Impressive model displayed.

One more model added. I really like this guy. Cute/ threatening, bit of a Miyazaki influence I think. 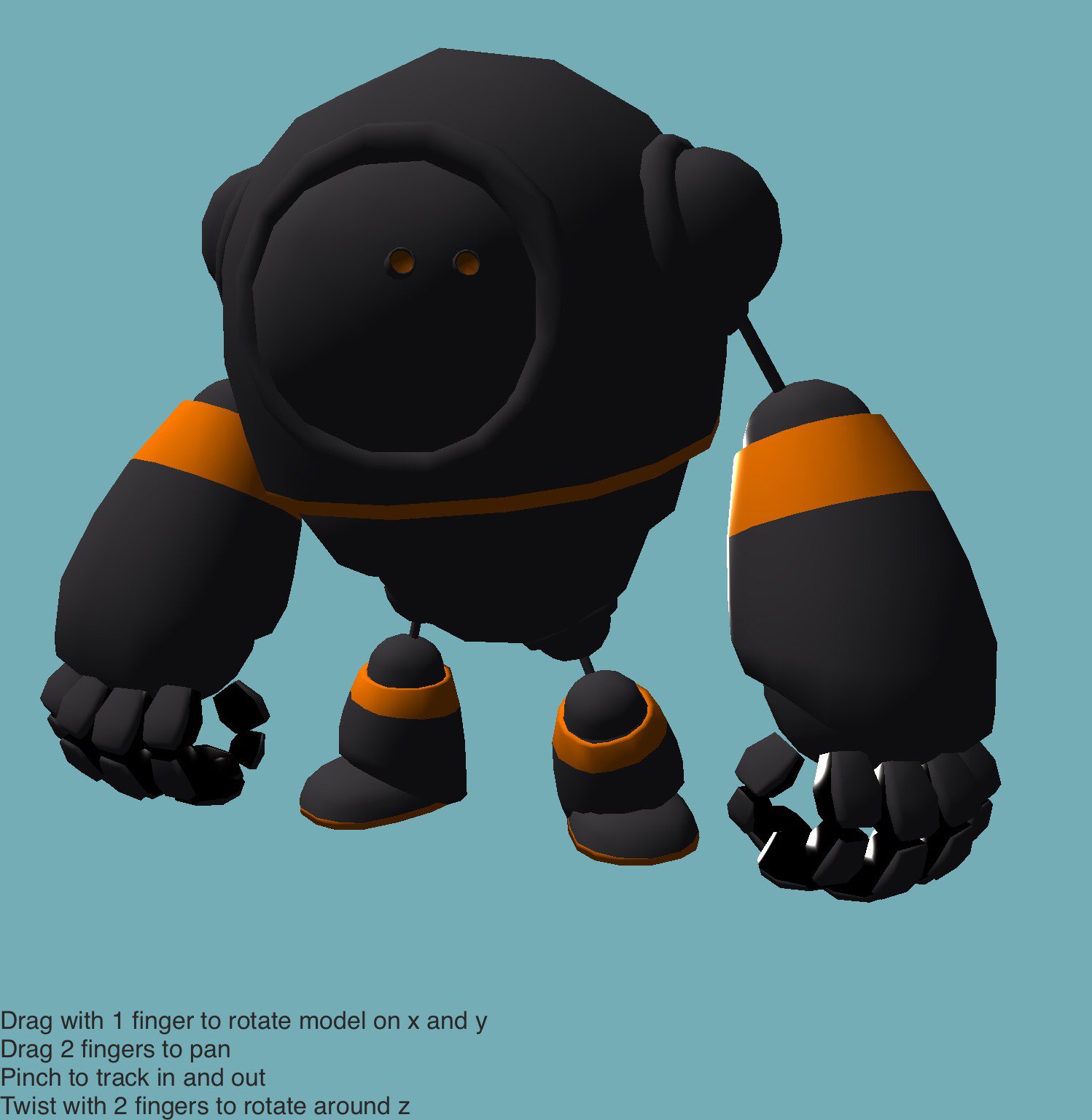 Except no 1, camera and perspective, go just before 4, as part of your draw cycle. A mesh is a unique set of geometry. A single mesh can be drawn in many different places in your scene. eg for an army of tanks, you’d have a single tank mesh, and then translate and rotate to various locations corresponding to each instance of the tank object to :draw() it. You could if you wanted further subdivide each tank into smaller meshes, say if you wanted the turret to move independently of the body. But that would slow things down a little, as generally speaking, you should try to minimise the number of draw() calls

@yojimbo2000 - yes, the problem with importing objects is that they often have too many vertices, and animating parts of them is difficult. I don’t want to spend dozens of hours just on the model.

Anyway, I do this for enjoyment, so I’ll end up doing whatever is the most fun

And yes, a lot of reading helps. I’ve written a lot about it as my own understanding has developed, as well as trying a lot of different projects.

Thanks guys - read most of what is presently in the forum. Taking a while to get my head round it. Think I’m close to being able to apply it now.

that is VERY cool B-)

My version of the wireframe code (I use the normal attribute, rather than color). The repository linked to at the top of the thread now has this code included:

I’m thinking I could use this standard derivative extension to further refine the stroke and anti-aliasing in the Soda roundedRectangle class, as it seems to have something to do with anti-aliasing.

… if I could find some decent documentation on what it actually does.

I’ve added antialiasing to the wireframe mode by combining mixing and discarding. Changes are in the repo

Added an option and a slider for wireframe stroke width. Should stroke width be proportional to distance do you think? 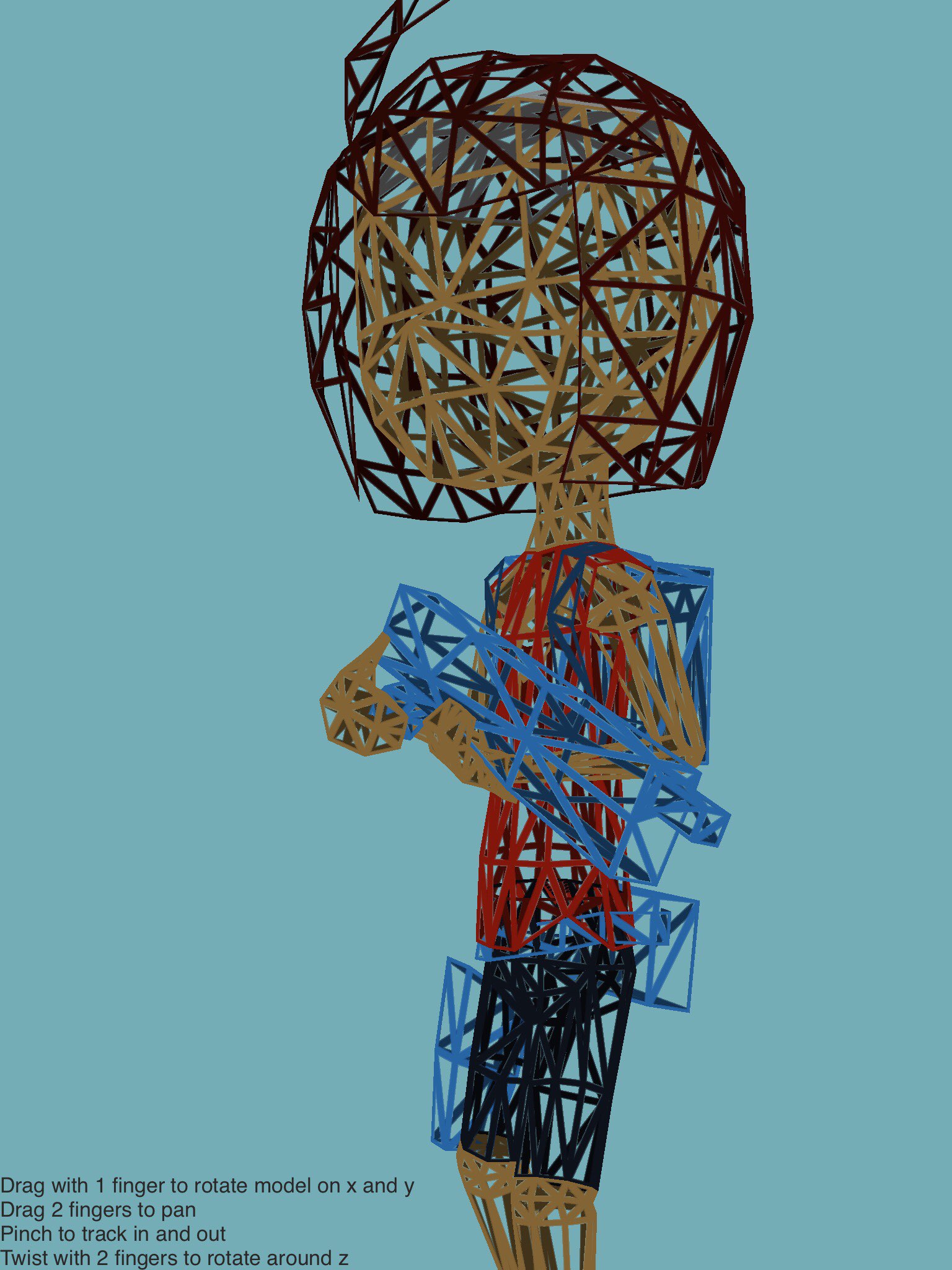 The section on derivatives is pretty complex though

Haha, I’m not going to do any testing until the dust settles, but I’m enjoying watching =D>

@yojimbo2000 - I’ve tried the latest code, and while I don’t get errors, when I load any model, it reports the number of bytes in the mtl and object files, pauses while it loads the files, then prints “0 bytes processed”, followed by the time in seconds.

But nothing on the main screen.