So i tried to implement one, and i found out that:

I also came to the conclusion that if i want a 2 way communication, the Composite class will be more complex to understand and use. So i decided to split my goal in 3 targets, from the simplest (and weakest) to the most complex (but hopefully more useful):

I’ve made a toy project (a series of boxes in hierarchy) and implented it with the 3 Composite class, to verify my code works as advertized. I will post the 3 projects below, and hope some of you are interested and provide me some feedback. 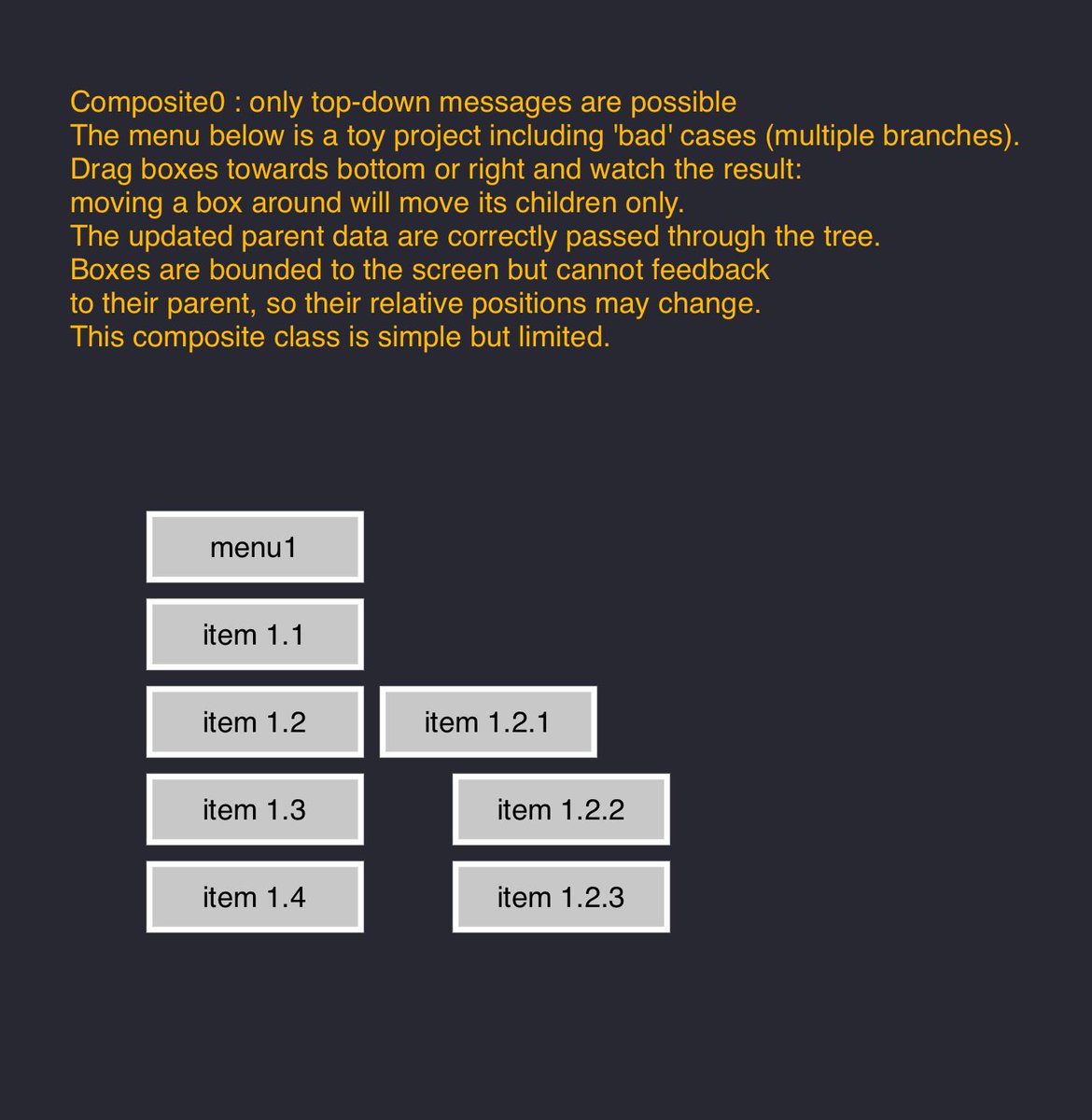 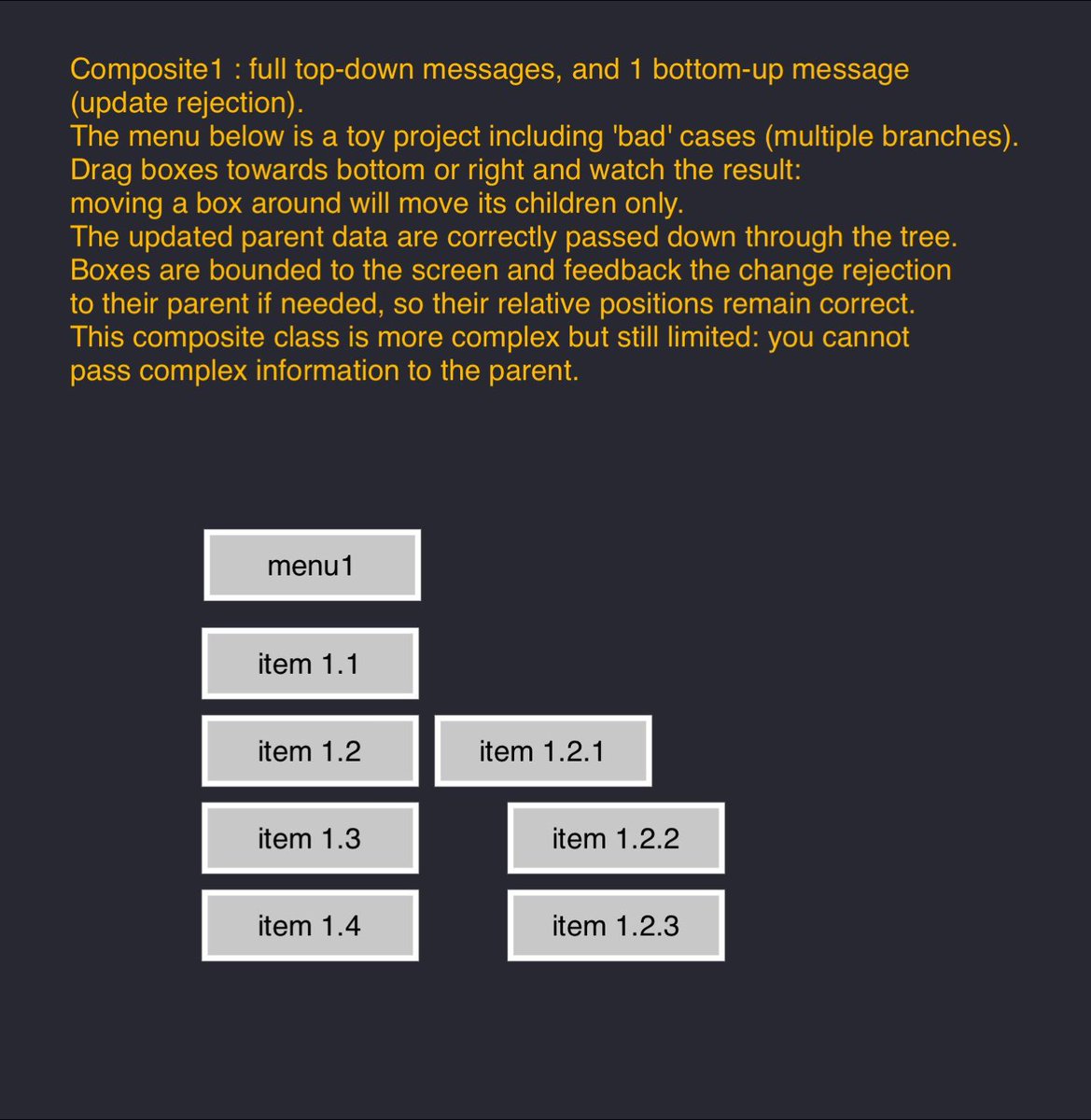 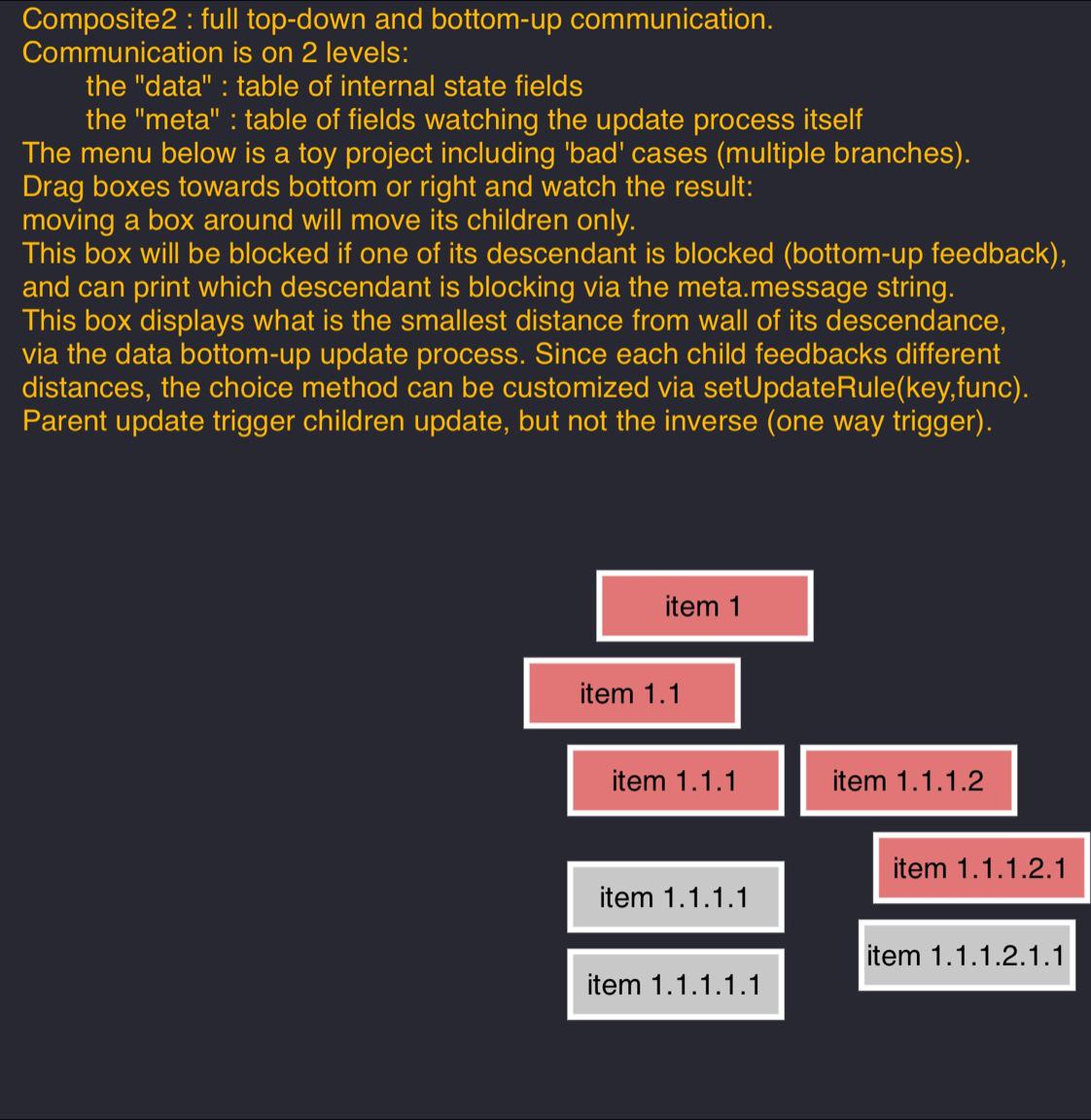 Thanks for posting all of these. Composite design is also something I’ve been thinking about a lot recently. If I can clean the code up, I’ll post my composite experiment. I find though that in actual projects (if that makes sense, rather than exercises or experiments), I rarely end up using the “libraries” that I or someone else has made and usually end up doing something very simple, like having each entity own an instance of the various components, as in

self.mesh=Mesh(properties) --owns an instance of the Mesh class

Are the different patterns you’ve described here meant to be used alongside each other in one project, or are you thinking you’ll choose one depending on the project?

I think of using composite2 only, for my buttons/widgets. The other versions are not powerful enough. I made them as intermediate steps, since composite2 was really difficult to set up.
[edit] my next step will be to make a wrapper to transform a ‘regular’ class (as we are use to write with codea) into a composite class that

Just to expand a bit on my comment above, about having an entity own instances of various components, one technique I use is have the init function of the component class expose a method in its parent object, eg the physics component init contains:

Where self.p is the parent entity. Then other components, AI or whatever, can access the interface via the parent, eg self.p:move(velx, vely)

interesting, thanks for the tip. Need to think about it.
And thanks for trying Composite2 also! I understand the code looks quite complex, but it is the simplest version (for now) that achieves my goals. My Next challenge: turn it into a wrapper so i can not even think about it any more, just use it seamlessly. This is what happened for me with the Event() class i was granted last year, which is so handy and simple once you trust it, that i couldnt do without it any more! So maybe this is possible with this pattern too. Maybe…